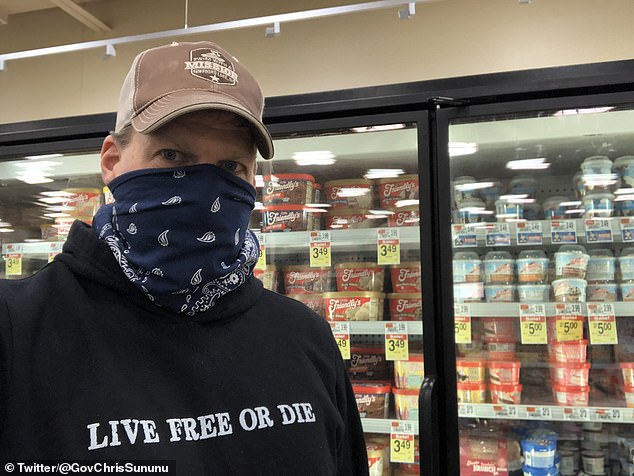 April 2, 2022- The Washington DC’s Gridiron Dinner, one of the few remaining large-scale white-tie affairs in Washington typically features light-hearted roast-style speeches from journalists and lawmakers from both major parties.

The motto of the dinner is “singe but don’t burn” with your remarks; however, Governor Chris Sununu showed no restraint and took his took his remarks to the extreme, going as far as dropping F bombs and smearing multiple Republicans, with a focus on President Trump.

Here’s an excerpt from Politico report on Sununu’s F bombs at the the Gridiron Dinner:

“You know, he’s probably going to be the next President,” Sununu said of Trump, musing about Trump’s “experience,” “passion,” “sense of integrity” and “rationale,”. he paused, then yelled: “Nah, I’m just kidding! He’s FUCKING CRAZY!” “ARE YOU KIDDING?!”

It didn’t stop there:

“The press often will ask me if I think Donald Trump is crazy. And I’ll say it this way: I don’t think he’s so crazy that you could put him in a mental institution. But I think if he were in one, he ain’t getting out!”

— And TED CRUZ hanging out with the People’s Convoy: “Nobody really knows why [the Convoy protesters are] in Washington in the first place — which pretty much describes Ted himself, right? … What is with Ted? You see that beard? … He looks like MEL GIBSON after a DUI or something.”

— On Trump ally and MyPillow CEO MIKE LINDELL: “This guy’s head is stuffed with more crap than his pillows. And by the way, I was told not to say this, but I will: His stuff is crap. I mean, it’s absolute crap. You only find that kind of stuff in the Trump Hotel.”

Sununu continued ragging on prominent Republicans, telling a story about Trump visiting New Hampshire and invited Sununu to ride inside the presidential limo. The then-president suddenly stopped talking and pointed out the window at people lining the road holding American flags, saying, “They LOVE me!”

Only problem, said Sununu, was that the man he pointed to held a sign that read, “FUCK TRUMP.”

Others confirmed Politico’s reporting (more on the dinner and list of attendees at this link.)

So much for being a ‘Trump guy through and through,’ huh Chris?

After Sununu’s behavior, it seems like he is going to be “burned not singed” by his own remarks. Now that they’ve leaked, Sununu gets to explain them to voters and pro-Trump legislators, and that’s just what he’s trying to do.

President JOE BIDEN didn’t attend the April 2nd event, but did send a video, which was played at the top of the night, in which he thanked Sununu for “helping Democrats keep the Senate.”

Rep. Jamie Raskin of Maryland, who spoke on behalf of Democrats at the dinner, remarked that he had not heard a “Republican use the F-word that much since the Nixon administration.”

“But I’ve got to say that Gov. Sununu’s eloquent profanity is the kind of insurrection the GOP needs today,” Raskin said.

This is not the first time Sununu has caused social unrest over his opinions of other prominent Republican Figures. Back in 2021, while Sununu was enacting draconian lockdowns and continuing to violate Constitutional rights of the Citizens of New Hampshire, he joked about how the New Hampshire House of Representatives were incompetent in performing their designated duties.

This past year we have not only seen multiple New Hampshire State Republican legislators try to impeach Governor Chris Sununu, but we have had a handful of others discussing complete State succession. Cleary Sununu hasn’t done a great job doing the ‘people’s work.’

The people of New Hampshire are not amused.