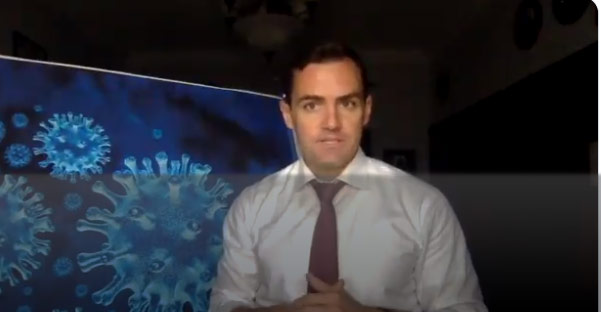 The following article is a reprint from: www.uncoverdc.com

Murphy, formerly a fellow with DARPA, has exposed additional “incriminating documents…hidden in a top-secret shared drive” concerning the gain-of-function research on bat-borne coronaviruses and the link between NIH and EcoHealth Alliance to the Wuhan Institute of Virology. According to Murphy, the documents were placed in the folder in July 2021. To this day, Fauci denies involvement in gain-of-function research and/or contracts.

In the August 13, 2021 letter with attachments obtained by Project Veritas, Murphy discusses information and documents to which he was privy during his time as a fellow for DARPA. Project Veritas emphasizes in its video that Maj. Murphy is “not the source of its reporting” and has done “nothing wrong.”

Murphy explains that the EcoHealth alliance submitted a proposal for a two-phase, $14,209,245 project named DEFUSE—Defusing the Threat of Bat-borne Coronaviruses (2018) to the Defense Advanced Research Projects Agency (DARPA) to conduct gain-of-function research of bat-borne coronaviruses. The purpose of the research was allegedly designed to “innoculate bats in Yunnan, China caves where confirmed SARS-CoVs were found. Ostensibly doing this would prevent another SARS CoV pandemic; the bats’ immune systems would be reinforced to prevent a deadly SARS-CoV from emerging.” Ultimately, the proposal was rejected because the risks were not well-considered at the time.

Murphy states that SARS-CoV-2 or, in his words, “SARS-CoV-WIV” (Wuhan Institute of Virology) is:

“less a virus than it is engineered spike proteins hitchhiking a ride on SARSr-CoV quasispecies swarm…it is a synthetic spike protein chimera engineered to attach to human ACE2 receptors and inserted into a recombinant bat SARSr-CoV backbone.”

Murphy also explains that EcoHealth and the “NIAID under the direction of Dr. Fauci, went ahead with the research in Wuhan, China and at several sites across the U.S.” Incidentally, the Obama administration and the NIH announced a moratorium on funding for gain-of-function research on October 17, 2014. The moratorium was lifted in 2017.

As previously mentioned above, the virus was accidentally released before it was “fully attenuated.” That means it was released before it mutated sufficiently “to be non-pathogenic…presumably to bats and humans,” as explained by mRNA developer Dr. Robert Malone.

Significantly, in the same article, Dr. Malone questions the logic of a construct where researchers would “choose a chimera that attaches to the human ACE2 receptors as the target?” Malone explains:

“Once again seeking to provide the benefit of the doubt, I suspect that the logic must have been that by vaccinating the bats with such a construct, this would reduce the risk of developing a human-adapted, ACE2-binding SARS-related virus in same bats. But if this is the case, then the logic is really convoluted. One would first develop a human-adapted SARS-like virus which binds human ACE2, then attenuate this virus, then find a way to aerosolize it, then infect the bats. And apparently, somehow, before the attenuation step to adapt the human-adapted virus to infect the bats, there was a lab leak.”

One of the more remarkable disclosures was Murphy’s reflection pertaining to whether government officials who received the report adequately understood “the significance of what [he] communicated” and that important “decisions with regards to the vaccines do not appear to be informed by analysis of the documents.” He goes on to say that SARS-CoV-2:

“matches the SARS vaccine variants the NIH-EcoHealth program was making in Wuhan; that the DOD rejected the program proposal because vaccines would be ineffective and because the spike proteins being inserted into the variants were deemed too dangerous (gain-of-function); and that the DOD now mandates vaccines that copy the spike protein previously deemed too dangerous. To me, and to those who were informed by analysis, this situation meets no-go or abort criteria with regards to the vaccines until the toxicity of the spike protein can be investigated. There’s also information within the documents about which drugs effectively treat the program’s SARS-CoVs.” (bold lettering added)

Murphy also emphasizes the vaccine’s poor efficacy in protecting against coronavirus, explaining that the “vaccine approach lacks sufficient epitope coverage to protect against quasispecies of coronavirus.” This is a critical point because it bolsters the argument that natural immunity, from exposure to the full virus, almost certainly provides sturdier, long-lasting immunity to the virus than does a vaccine that only amplifies the spike protein. Moreover, evidence suggests that spike proteins from the vaccine can circulate in the blood, causing inflammation and micro clotting. And, there is growing evidence that the spike proteins in the vaccine are themselves causing harm and/or death.

Stunningly, Murphy also seems to confirm that the “mass vaccination campaign” will make matters worse, simulating its own “accelerated gain-of-function,” making the virus deattenuated—or stronger. He states that the vaccination “campaign” was “done with the world’s population” as a result of the virus’ escape from the lab in Wuhan.

One of the more disturbing confirmations in Murphy’s letter—obtained by Project Veritas—centers on his discussion of the known therapeutics like Ivermectin and Hydroxychloroquine (HCQ) to inhibit viral replication and modulate the immune response. He appears to confirm that effective therapeutics were known and suppressed for reasons that are yet unclear. There is certainly plenty of anecdotal evidence to suggest that therapeutics were purposely withheld at great cost to hundreds of thousands of Americans.

Murphy explains that the push to limit disease transmission should be dropped “as a strategy” and is not even “feasible.” He also says that early treatment and prophylaxis are preferred interventions over the use of vaccines.

The Project Veritas video shows a letter from Murphy asking Americans to take heart—stating that there are “good people striving for truth, working together in and out of government” to provide answers.

Murphy Is Not Alone: There Are Other Smoking Guns

Murphy’s interpretation of the information confirms other documents that UncoverDC reported with its September story on documents released by The Intercept. Murphy’s account is also further bolstered by a remarkably clear point-by-point discussion of the events of the pandemic by a religious leader in Trinidad, Dr. Michael McDowell.

In the video below, McDowell logically lays out the evidence of the “covert bioweapons industry” that led to the current pandemic and resulting vaccines. Coincidentally, he is seen in the video on August 14, which is one day after the date on Murphy’s letter.

He calls the pandemic a “new kind of arms race” and discusses the Biosafety Level 4 Labs (BSL4), like the ones at Fort Detrick and in Wuhan, China, that develop the kinds of deadly pathogens like SARS-CoV-2.  Scientists from those labs participate in the gain-of-function experiments associated with SARS CoV-2. There are 59 maximum containment labs worldwide. The Wuhan lab is the largest. Reporting by two writers from the King’s College in London states that:

“spread over 23 countries, the largest concentration of BSL4 labs is in Europe, with 25 labs. North America and Asia have roughly equal numbers, with 14 and 13 respectively. Australia has four and Africa three. Like the Wuhan Institute of Virology, three-quarters of the world’s BSL4 labs are in urban centres.”

McDowell quotes Dr. Francis Boyle, a human rights lawyer in Chicago who worked with Congress on the Anti-Terrorism Act of 1989. Boyle cites a February 2020 study that looks at a “furin-like cleavage site” on the COVID-19 virus. He says the smoking gun in the study states that this “furin-like cleavage site…may provide a gain-of-function to coronavirus for efficient spreading in the human population.” He stated at the time, COVID-19 was “a weaponized biological warfare agent, and there is no legitimate scientific or medical
use for gain-of-function technology.”

McDowell lays out the numerous “smoking guns,” including Daszak’s research, funding by China of labs in Australia, alleged evidence of “elements of HIV” present in the virus, the continuation of GOF research, in the face of a moratorium on it. He even mentions the arrest of Harvard Professor Charles Lieber and the arrest of two Chinese students at an International airport as they attempted to smuggle in 21 vials of sensitive biological material in January of 2020. Lieber was allegedly paid around $50,000 a month, beginning in 2011, to become a “Strategic Scientist” at Wuhan University of Technology (WUT) in China. According to the DOJ press release, he was also “a contractual participant in China’s Thousand Talents Plan from in or about 2012 to 2017”.

Everything McDowell says confirms Murphy’s observations. His discussion also confirms information released in Fauci’s and Daszak’s emails, EcoHealth communications, and all of the information found in the Intercept documents. Many of the documents and communications McDowell discusses pointedly aimed to hide important life-saving information from the American public.

Additionally, McDowell discusses the work of several scientists, including Dr. Len Horowitz, author of “Emerging Viruses: AIDS And Ebola: Nature, Accident or Intentional?” whose 2001 interview reveals a history of behavior by scientists and bureaucrats in the U.S. government who participated in the development of AIDS vaccines—a pattern of behavior that is eerily similar to that which has unfolded in the past two years.

Murphy’s explanations are further substantiated by information from DRASTIC Research discussed by Rep. Mike Gallagher in his September 23 presentation on the furin cleavage sites that allegedly prove the COVID-19 virus could not have been a naturally occurring event. Gallagher explains:

“Now, we already know that Daszak’s EcoHealth Alliance and the Wuhan Institute of Virology were modifying coronaviruses and their spike proteins to infect human cells under an earlier grant from Dr. Anthony Fauci’s Institute at the NIH. But what we learned from this DARPA proposal is that Daszak wanted to go even further, he wanted to further modify the coronavirus spike protein to find potential, what’s called furin cleavage sites, and even introduce human-specific cleavage sites.”

On Tuesday, James Comer from the Committee on Oversight and Reform and Rep. Jim Jordan of the Committee on the Judiciary sent a letter with attachments to Secretary Becerra, Director of U.S. Department of Health and Human Services, making public emails sent by Dr. Anthony Fauci and demanding a transcribed interview of Dr. Anthony Fauci, Director, U.S. National Institute of Allergy and Infectious Diseases (NIAID). The letter allegedly reveals that Fauci warned of two things:

“(1) the potential that COVID-19 leaked from the Wuhan Institute Virology (WIV) and (2) the possibility that the virus was intentionally genetically manipulated.”

The letter also states that Fauci sidestepped the moratorium on the gain-of-function research by working with EcoHealth “allow[ing] EcoHealth to complete dangerous experiments on novel bat coronaviruses—with very little oversight—that would have otherwise been blocked by the moratorium.” Members of the Committees also suggest that Fauci was aware that EcoHealth was not in compliance with the terms of its grant and failed to “submit an annual progress report to NIAID by September 30, 2019.”

Sickening details emerge in the letter, describing numerous meetings and communications that allegedly sought to control public-facing messaging and intimate possible attempts by government officials, including Fauci, to alter language in the scientific journal Nature Medicine regarding the origins of the virus.

Evidence suggests that government officials suppressed information that indicated the origins of the virus were not natural but manufactured in the lab in Wuhan, China. The attached emails also seem to confirm the furin cleavage site as an indication that it is “highly unlikely” the virus occurred naturally.

Incidentally, a Bayesian analysis published on January 29, 2021, by Dr. Steven Carl Quay contends, “beyond a reasonable doubt that the SARS-CoV-2 virus is not a natural zoonosis but instead is laboratory-derived.”

There are also emails from former Director of the NIH, Francis Collins, who retired in December, that speak about hiding information from public view because “voices of conspiracy will quickly dominate, doing great potential harm to science and international harmony…”

Sadly, much of the dialogue in the emails seemed to focus more intently on “doing harm to science” than doing harm to the American citizen.

This article is a reprint from: www.uncoverdc.com