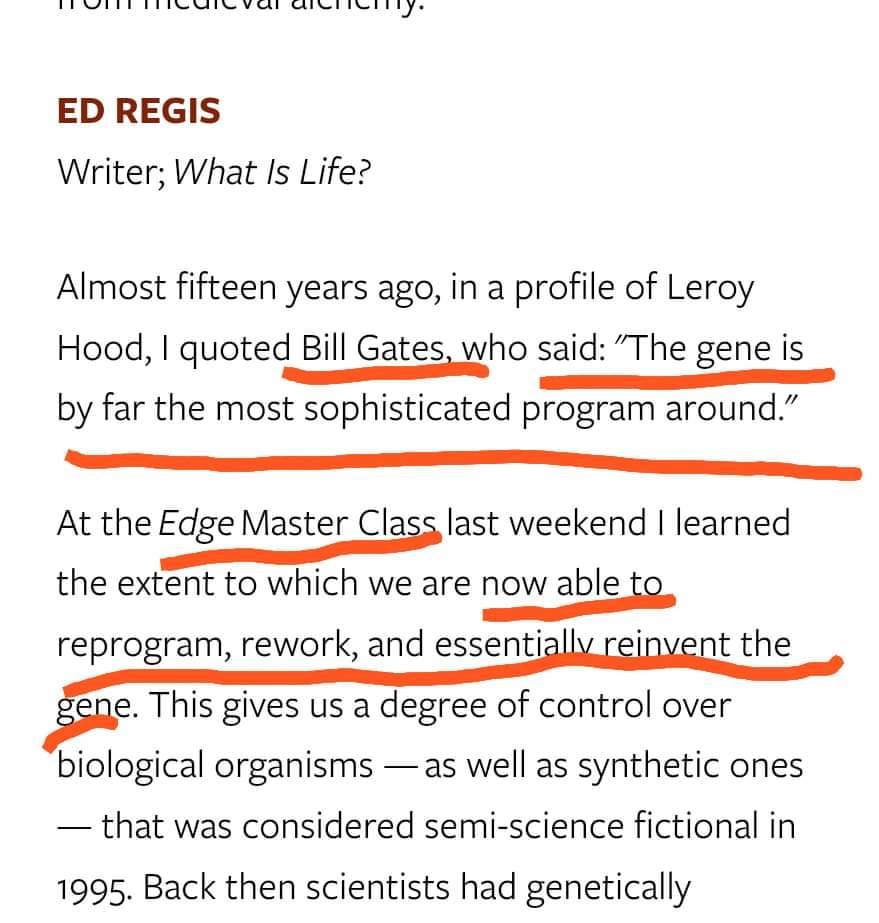 Edge Master Classes.. where the parasite class would get together and talk about how to become the ‘Masters’ of the Universe. Seriously. See for yourself.

Jeffrey Epstein and Dean Kamen have both frequented these meetings, among many other names.

In the one class I’d like to highlight today, facilitated by George Church & Craig Venter, “A SHORT COURSE ON SYNTHETIC GENOMICS,” they discuss the genetic modification of different things, including humans, aka Humans 2.0.

“George Church had the final say in a lecture entitled “Engineering Humans 2.0.” Human beings, he noted, are limited by a variety of things: by their ability to concentrate and remember, by the shortness of their lifespans, and so on.”

“He could insert genes, remove genes, and create a new species with new characteristics. In August 2007, he actually changed one species into another. He took a chromosome from one cell and put it into different one. “Changing the software [the DNA] completely eliminated the old organism and created a new one,” Venter said.”

Here is a direct quote from the class:

Unfortunately, the video is missing (of course).

Edge.org: “The event, which was by invitation only, was attended by about twenty members of America’s technological elite, including Larry Page, co-founder of Google; Nathan Myhrvold, formerly chief technology officer at Microsoft; and Elon Musk, founder of PayPal and head of SpaceX, a private rocket manufacturing and space exploration firm which is housed in a massive hangar-like structure near Los Angeles International Airport. The first day’s session, in fact, was held on the premises of SpaceX, where the Tesla electric car is also built.Synthetic genomics, the subject of the conference, is the process of replacing all or part of an organism’s natural DNA with synthetic DNA designed by humans. It is essentially genetic engineering on a mass scale.””

DARPA production of humans 2.0 when it pertains to neurology
https://optios.com/