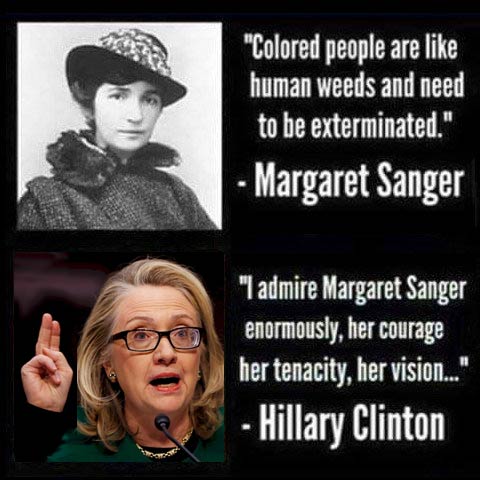 How’s that population control working out?

We have not had the number of births necessary for a generation to replace itself since 1971.

“Birth rates have been steadily declining since 2007, when 4.3 million babies were born in the United States. Total fertility rates have been below replacement – meaning the number of births necessary for a generation to replace itself – since 1971.”
https://www.cdc.gov/nchs/data/nvsr/nvsr67/nvsr67_08-508.pdf

Planned Parenthood and its founder, Margaret Sanger, are the progenitors of all modern population control agendas in the United States. It’s important to note that Planned Parenthood receives a vast majority of its funding from the federal government, thus is essentially a government organization

The July 1922 issue of Birth Control Review, stated the following as a founding goal:

“Sterilization of the insane and feeble-minded and the encouragement of this operation upon those afflicted with inherited or transmissible diseases, with the understanding that sterilization does not deprive the individual of his or her sex expression, but merely renders him incapable of producing children.”

Sanger founded The American Birth Control League in 1921, according to the Encyclopedia of Women’s History in America. It’s mission statement not only reiterated Sanger’s goal of eugenics, but racially-targeted eugenics.

THE AMERICAN BIRTH CONTROL LEAGUE. Its Aim: To promote eugenic birth selection throughout the United States so that there may be more well‑born and fewer ill‑born children ― a stronger, healthier, more intelligent race … and in order that those who are physically and mentally unsound may use birth control to have fewer or no children” Birth Control Review, Volume XVI, Number 12 (December 1932), page 319.

Proud eugenist Bill Gates said at a TED Talks that new vaccines can lower the population “by 10 to 15%.”
https://youtu.be/JaF-fq2Zn7I

The Jaffe Memo of Population Control

Frederick S. Jaffe was the Vice President of Planned Parenthood in 1969. He was also Executive Director of Planned Parenthood’s Center for Family Planning Program Development. He wrote a memorandum in response to a request from Bernard Berelson, who at the time was President of the Rockefeller-founded Population Council. The March 11, 1969 letter became known as the Jaffe Memo.

The 9-page document is a fascinating read into the minds of eugenicists and depopulation advocates. But it is page 9 that is essentially the blueprint for everything that has happened since 1969 related to American families, social norms, sexuality and depopulation. A table outlines “Proposed Measures to Reduce Fertility by universality or Selectivity of Impact in the U.S.”

Proud eugenist Bill Gates said at a TED Talks that new vaccines can lower the population “by 10 to 15%.”https://youtu.be/JaF-fq2Zn7I

John Hopkins was founded by Rockefeller